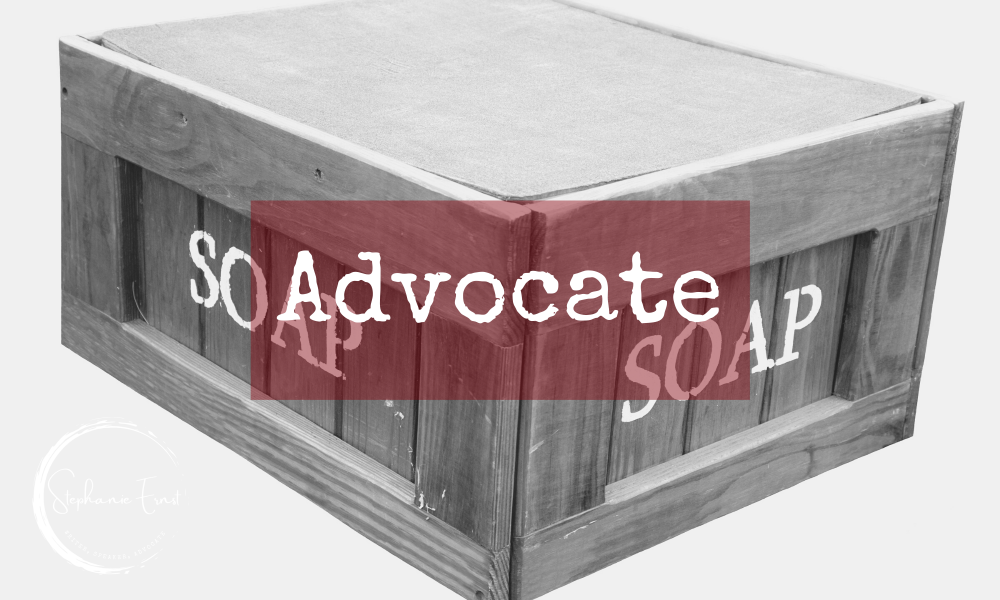 My name is Stephanie Ernst, and TAPS advocacy is my game.

My friends have always described me as small, but loud. If there was a soapbox and an issue to speak out against, there I would be, shouting loudly and proudly about injustices and topics that need to be talked about. At 5 feet tall though, it’s also likely I’m still unable to see to the back of the crowd, which is probably why I was blessed with a big mouth too…

The symbolism of the soapbox is about impromptu speeches, often about political, and controversial subjects.

Soapboxes are seen as a place for an impromptu, and often flamboyant speeches. (And if you’ve read my about, you’ll know I can be flamboyant and impromptu!)

Let’s be honest here. I even stood on a box to get married. Admittedly, my husband is nearly 2 meters tall, and the box was handy, but this really becomes synonymous with me.

If I’m committed to something, I’ll make sure that everyone can see and hear me speak about it. If it means standing on a box to make a vow, then so be it.

Let me introduce you to my chosen soapbox subject.

Not every rare disease has a loudspeaker to announce it’s here. Twin Anemia Polycythemia Sequence found me to broadcast its arrival.

In 2013, my identical twin daughters were born with TAPS. Since then, I’ve made it my mission to bring not only their story to the world but the stories of other families affected by TAPS. But it’s not just about sharing stories. It’s recognizing the exceptional researchers that dedicate their lives to it and raising awareness of this rare disease.

My diagnosis was lonely and isolating, and I knew that it was time to raise the profile of this rare disease. In 2018, I created the TAPS Support website and Facebook group, and in 2020, took this to the next level by creating a foundation that is dedicated to helping fund research into TAPS, as well as related diseases, and connecting families affected by it to research and to each other.

TAPS is not an easy diagnosis. In the world of research, it is highly controversial and many screening guidelines do not support it. I regularly speak out about this, and also the level of misinformation out there about TAPS.

Mistakenly called a form of TTTS, this dilutes the urgency of changing screening protocols to incorporate routine TAPS checks in twin pregnancies. Often families feel let down by the system, and lost in the crowd because no one understands their disease, or has even heard of it.

In 2013, I had a standard of care given to me that now 8 years later, many families are struggling to get. I’m not special, I’m not a celebrity or anyone special – just a regular human being. Why should people be denied the same treatments and care that I got, just because outdated guidelines exist? The evidence that TAPS screening saves lives is there, so why not embrace it?

Since my girls’ diagnosis, I’ve also seen a lot of problems with the way society sees multiple births. There’s a perception of “double trouble” and cheeky twins playing tricks, but the reality can be much darker and colder than that. Multiple births are at high risk of complications, and there is a very big need to follow up these babies that are often born pre-term, with serious conditions.

Being a twin is a lifelong diagnosis.
Having a diagnosis of TTTS, TAPS or SFGR should be a lifelong consideration.
Prematurity is a lifelong condition.
The impact (financial, emotional, and psychological) these diagnoses have on a family is huge.

We need to educate our families, our friends, care providers, and governments on these risks, and how we can work together to support multiple birth families. What’s also important is that the perception that prematurity has an expiry date changes, and multiples are followed up with regular checks on development and motor skills.

I Want To Change The World

My taste of academia came with the publication of the first research article I worked on in 2019, and since then have participated in a priority setting partnership in London, as well as publishing my second article in 2021.

Dr. Kypros Nicolaides once said, “There is no diagnosis of twins. There are only monochorionic twins or dichorionic twins. This diagnosis should be written in capital red letters across the top of the patient’s chart.”. This was taken a step further in a paper by the amazing team of Moise and Johnson in 2010, and this is a quote I have taken to heart. I believe that change starts with getting your hands dirty, creating change from within, and speaking up about inconsistencies.

In order to trigger change, you have to make change happen.

You can’t sit around and wait.

Since my girls’ birth in 2013, I’ve written many articles, and spoken at events. I’ve traveled and met many TAPS parents, and even dabbled in writing academic papers myself. It’s certainly not the life I saw myself leading back in my early years. It has become my passion.

The quote from Professor Nicolaides has become my mantra. It’s the inspiration for the TAPS Support Foundation – that having twins isn’t always black and white. Sometimes you need to see red to make a change.

I saw a pair of red and white twins once, who impacted my life and changed the way I saw the world. I’m proud to say I’m their mom. They have inspired me to create a little chaos, speak loudly, and very impromptu about their story. But most of all, I want to bring hope and change to other twin families worldwide. I’m standing on a soapbox, but TAPS patients are sitting on my shoulders to see over the crowds in front of us.

I am Stephanie Ernst, and this is my TAPS advocacy story. Don’t trip over my soapbox.

Want to ask more questions, or share my soapbox? If you’d like to talk about a TAPS diagnosis, or ask how to advocate, get in touch!

From helping twin parents to talking about online communities and their positive impact, I would love to talk with you.