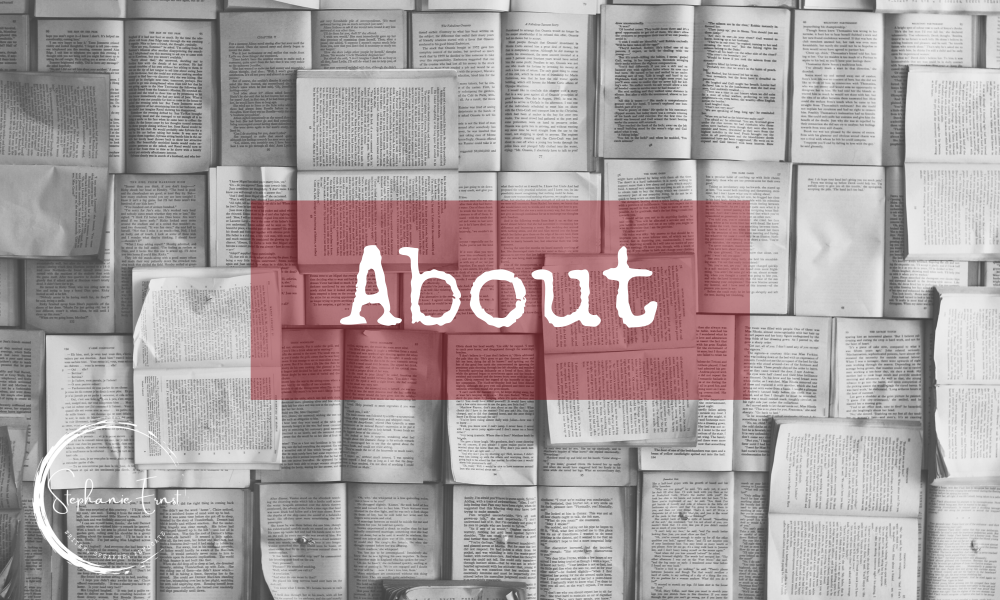 There’s more to Stephanie than just a sassy mouth, wicked sense of humour, and her signature red lipstick. Her passion for life comes from her life experience, and sharing her story is just part of the fun.

Chapter 1: In the Beginning

Born in regional Queensland, in Australia, Stephanie was in love with the written word from an early age. An avid and early reader, her first love was Enid Blyton books. She always knew she would write stories, and from early on she found comfort in reading, and writing stories.

Chapter 2: The Bit In Between

She spent most of her early life heavily involved in Scouting – a passion she continued up until the day she left Australia. Her love for theatre was sparked by the Brisbane Gang Show and Rochedale Revue that she was an enthusiastic cast and crew member for both. Infamous for her backstage shenanigans and larger than life on stage presence (no one will forget the French Maid Incident!).

Stephanie started to study Education at university, but found that working for a living was a far more appealing way to do things and fund her expensive travel habit.

You see, she had met this Dutch guy on an online political game, and the commute from Brisbane to Amsterdam was becoming a killer on the budget.

So in 2012, she left her job in insurance, married the man of her dreams and ended up halfway across the world in the land of clogs and tulips, waiting for the next adventure.

And boy, what an adventure that one was!

Chapter 3: The Stuff With Twins

Starting life in the Netherlands wasn’t too bad. She volunteered with the local expat group and started Dutch courses to learn the language. All was great until she fell pregnant with twins. The pregnancy was complicated, and her girls were delivered at 31 weeks with a rare disease called Twin Anemia Polycythemia Sequence.

There’s a rather amusing story about a placenta in here, which led to her passion for advocacy for monochorionic twins. She created first TAPS Support, a website dedicated to sharing information about her girls’ rare disease, and this led to her forming the TAPS Support Foundation in 2020, a charity dedicated to raising the profile of TAPS, and raising money for research into this disease. Working with researchers and medical teams means that she also brings the latest research to her foundation, and dabbles also in a bit of academia herself.

Her passion for raising awareness comes from a place of loneliness when she was diagnosed back in 2013, and a desire to ensure no family feels lost again.

Chapter 4: To Infinity And Beyond!

What does the future hold? Why do we want to know about Stephanie Ernst? It’s simple. She’s a full-time mum of two adorable, chatty girls. She cooks up a storm in her spare time and hates housework with a passion. She dabbles in a lot of things, reads history books and autobiographies, is obsessed with historical dramas but loves to point out the inaccuracies, and loves vintage clothes. She also still likes her husband after 15 years of knowing him … so there’s that.

She’ll talk about TAPS underwater, and will make sure the world knows about it too.

She is creative, cheeky, and fun, and does everything with a smile (and the occasional grumble), but her addiction to lists, post-it notes, magnetic whiteboards, and Google Calendar means that she’s reliable. (To her husband’s annoyance.)

But the most important thing is this – if you’ve made it this far and are curious about Stephanie Ernst … Drop her a line to discuss ALL the future possibilities.

Let her help you with your copy, or tell your story.

Do you want to talk about being a patient advocate, or is there something you’d like help advocating for?

Stephanie would love to work with you and start a new chapter in your story.

Now as I start upon my chosen way,
In all I do, my thoughts, my work, my play,
Grant as I promise, Courage new for me
To be the best, the best that I can be.